When Ding Xiao Rou (Qiao Xin) turns 17, a misunderstanding leads Xiao Rou to believe that she will never find happiness. However, he crosses paths with Chi Xin (Xu Wei Zhou), thus beginning a peculiar romance. Ding Xiao Rou is an ordinary girl who believes she was ‘cursed’ when she was young to never find happiness. One day, he meets the insomniac Chi Chi Xin. Which begins with overlapping misunderstandings between the two suckers into an innate admiration for one another as the two hearts grow closer over time. 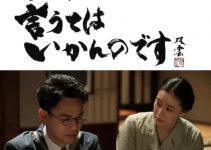